Scroll to the end of this story to find out how you can enter your business in the contest. 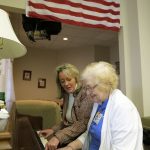 One is finding a way to ease the looming financial crush of an aging population. Another is trying to help teenagers build self-esteem through the arts. And yet another is using high-tech wizardry to help consumers take better care of themselves.

We Care Adult Care in Middletown, Ensprited Projects in Brick and GoMo Health in Asbury Park are the finalists in the health care category for the Asbury Park Press’ Small Business Innovator of the Year Award.

The award program, presented by OceanFirst Bank, is spotlighting Monmouth and Ocean County entrepreneurs who are finding new ways to tackle problems — and are helping make the Shore a better place in which to live.

The region’s economy is at a crossroads. Once known for the innovations that were discovered at places such as Bell Labs in Holmdel and Fort Monmouth, the Shore more recently has wobbled in its bid to rebuild from the damage left by the collapse of the housing bubble and superstorm Sandy.

It has left the region with red flags. A recent survey by the Monmouth-Ocean Development Council, a leading business group, found the percentage of its members who considered the Shore’s quality of life better than other New Jersey counties fell from 60 percent in 2015 to 45 percent last year.

MORE: NJ banks doing better, so why are they worried?

The innovation awards’ goal: find a new generation of small-business owners who will help the Shore prosper in the digital age.

A panel of eight experts is judging nominations. They are: Christine Gray, vice president of commercial lending at OceanFirst Bank; Sarah Krug, a Middletown resident who is CEO of Cancer101, a nonprofit based in New York; Jennifer Crews, a Red Bank resident and founder of Flock, a start-up technology company; Ben Waldron, executive director of the Monmouth-Ocean Development Council.

The next category will be retailers and wholesalers. The deadline for nominations is March 15.

The health care finalists were a cross-section of entrepreneurs. One relied on algorithms and venture capital. Another relied on a craft as old as Shakespeare.

What do they have in common? “You’ve got to have that mindset that it’s OK to be perceived as different as a person or your ideals,” said Bob Gold, chief executive officer of GoMo Health in Asbury Park. “Different is OK.”

MORE: Horizon push is keeping people out of hospital 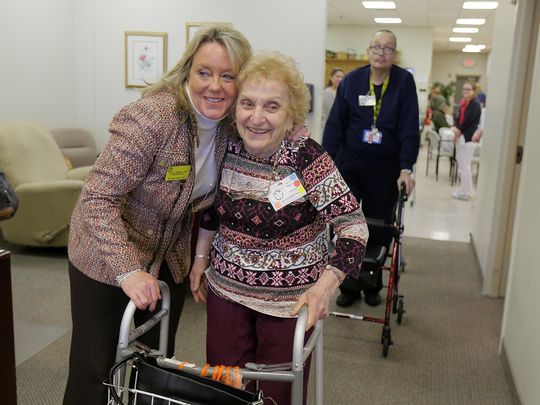 What it does: A day care center for Monmouth County seniors who live alone or with their adult children. It includes medical care, transportation, meals and activities for $90 a day, although middle- and low-income residents are eligible for financial aid.

What makes it innovative: “We are seeking solutions for the baby boom generation who are taking care of their elderly parents in the most cost-effective way,” Wolfman said. “With the surge of seniors, we have now a tsunami of them. … Our government is not going to be able to sustain all of this population being on Medicaid. So not only are we providing them a quality of life and still remaining in their homes, but also our tax dollars.” 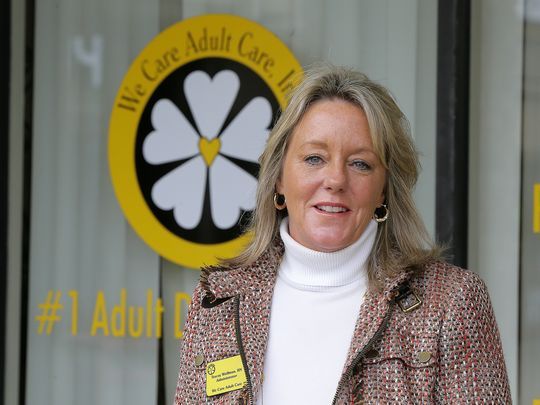 Why didn’t I think of that?: “When I was a young nurse, I worked at a large geriatric campus in Florida that had all the concepts — independent living, assisted living, nursing home and adult day care all in one place,” Wolfman said. “New Jersey had not yet had assisted living. So it was a very interesting concept. After I came back, I went back to school and got a bachelor’s degree and master’s degree to have the requirements to be an administrator. A lot of times I saw patients when I worked in a hospital that were being placed in nursing homes and institutional settings that I thought was unnecessary. They just needed that in between. When you’re taking about coming here five days a week, it’s $23,000 a year. Assisted living is about $90,000 to $100,000 a year. So there’s a huge cost savings.”

Financial obstacles: “The first thing, we had to secure funding. We were an unknown business, an unknown entity trying to convince the bank to give us money. The only thing they went on was the business plan. And my pure determination to change the lives of seniors who were institutionalized unnecessarily. We did get approved, and we got approved on the first submission. … Nobody knew what the concept of adult day care was.”

Judge’s comment: “For me, it was an innovative twist on the way elder care services are delivered,” said Jennifer Crews, a Red Bank resident and founder of Flock, a startup technology company. “It ended up solving problems for every constituent. For the elder person, it’s fun and stimulating. For the person who is caring for the elder person it is less expensive and they have peace of mind that someone is taking care of their parent. I like that. They took an existing model and flipped it around.”

MORE: We Care Adult Care in Middletown learns from its clients 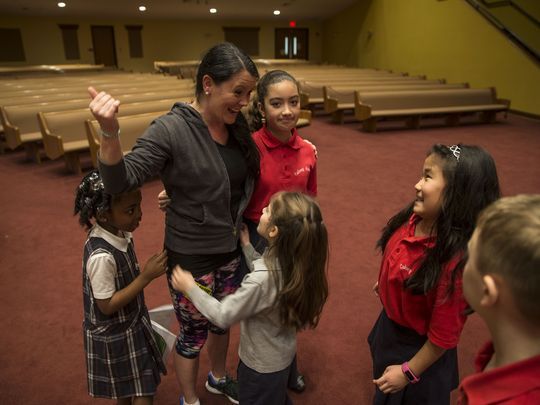 Colleen Finnegan is the founder of Enspirited Projects, a small business that helps to build self-esteem within children. She is shown during a drama workshop with students at Calvary Academy in Lakewood. (Photo: Doug Hood)

Employees: One full-time (Finnegan) and 10 part-time.

What it does: A creative programming company mostly for youth that works with schools to help build self-esteem through the arts.

What makes it innovative: “By working creatively with these kids, what we’re doing is we’re improving their self-worth because mental health is so directly tied to positive self-esteem,” Finnegan said. “Our work really comes from that place. Your creativity is so linked to your self worth. If you can contribute what’s inside of you to your community and people value your contribution, everything else falls into place. What’s so amazing is so many people don’t get that and don’t realize it. That has been the magic juice for so many kids we’ve worked with.” 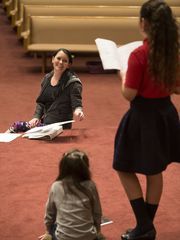 Colleen Finnegan is the founder of Enspirited Projects, a small business that helps to build self-esteem within children. She is shown during a drama workshop with students at Calvary Academy in Lakewood. (Photo: Doug Hood)

Why didn’t I think of that?: “My degree is in acting, and there was a month where I really needed to pay my bills, and I’m, like, ‘What can I offer the world? I really need to provide a service,’ Finnegan said. “And I’m, like, ‘Well I have a degree in theater. I really believe I could teach some of the things that I’ve learned.’ I went to a school … and I pitched them a drama program. I said, ‘Listen I saw you don’t have this. Your kids could really benefit from the self-esteem (lessons) and the public-speaking opportunities, let me offer a drama program here.’ In my very first pitch meeting, she said yes.”

Financial obstacles: “We’re getting there,” Finnegan said. “This has become a full-time thing for me just in the last two years. And I have never gotten any financial backing from anyone, and my company has no debt. So those are all good things. I bootstrapped it. I found a way to make it work. I really believe in, like, just serve your community and the rest will follow, and that’s how it’s been so far. We’re going to be opening a storefront in (Brick) this summer so that will be a major step forward in terms of stability. It’s going to be called the Creativity Studio.” 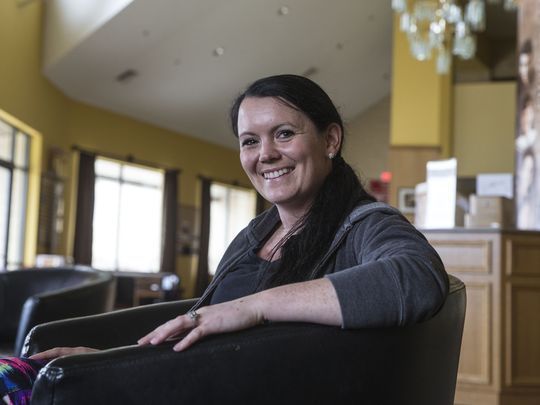 Colleen Finnegan is the founder of Enspirited Projects, a small business that helps to build self-esteem within children. (Photo: Doug Hood)

Judge’s comment: “I just feel like there is a layer of teenage emotionality that is untouched by the majority of adults,” said Christine Gray, vice president of commercial lending at OceanFirst Bank. “And as much as you remember being there and you can say, ‘I was there, you’ll get past it, it will go away, it gets better,’ there’s just this invisible layer that we don’t know about that all these kids are struggling with.” 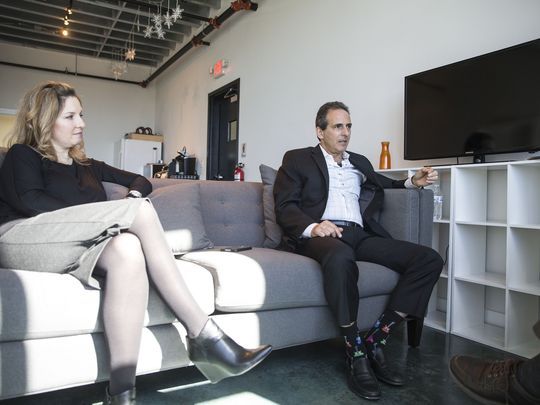 Employees: 30, including 14 in Asbury Park and Shrewsbury.

What it does: Develops software for hospitals, health insurers and drug companies to provide personalized care to consumers. Their patients receive text messages tailored to their lifestyles to remind them to exercise, take their medication or cook a healthy meal, for example.

What makes it innovative: “The issue is, current technology in health doesn’t work typically with how people behave or how they learn,” Gold said. “There’s apps. There’s portals. … But we’re looking at helping the person build their own trust and credibility by giving this concierge tool that’s communicating with them.” 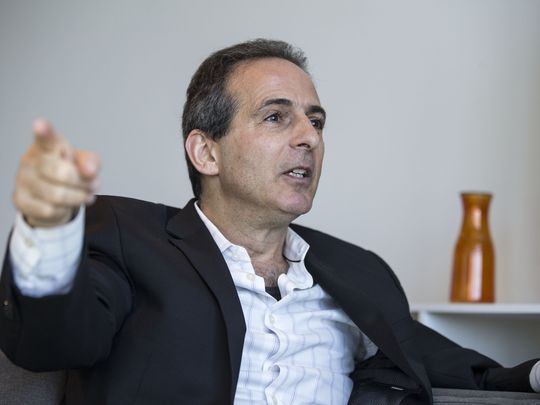 Why didn’t I think of that?: “I came up with the idea because my field of science is the science of human engagement with a focus on motivation and persuasion,” Gold said. “I applied that to consumer products. Do you like a brand, do you want to buy the product now, do you want to increase the basket size? How do we get you more loyal to a brand? Both my parents died unexpectedly about 18 months apart in the late ’90s. So that was kind of weird; I was the oldest, there was no older generation. There’s a different perspective. One of the issues with my parents was an issue with health, the doctor and hospital. I said, ‘Look, I have this skill set.’ I wasn’t ready to do it just then, but I kept on thinking about it and said I’m going to devote this skill to building out the science of patient engagement and will go and try to help people. It’s a big mission because we’re at the forefront of helping the industry change to we treat the person, we don’t treat the disease.”

Financial obstacles: “We were losing significant dollars,” Gold said. “There was a lot of pain the first few years. … There were times we didn’t take any salary. I put money in originally (along with) a couple other folks here. We ended up going and getting a few angel and outside investors that came into the company that saw the vision. So we raised outside capital. It enabled us to sustain the business and now we’re profitable, so it’s good. … You have to believe in yourself, you have to believe in others. You have to view life as a journey, not as a destination, and you need to feel compelled to act.” 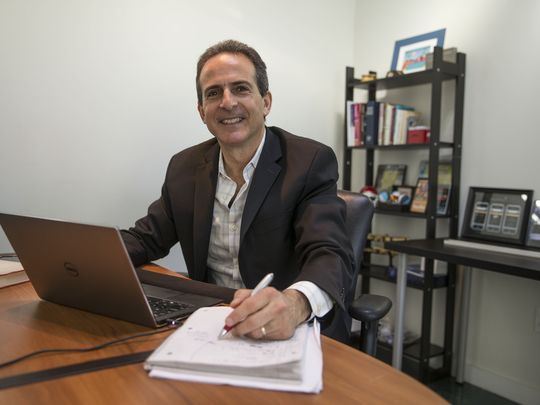 Judge’s comment: “The preventive aspect is part of where health care is headed, and we have to do a better job to manage costs before they become really large costs,” said Joe McManus, director of the Center for Entrepreneurship, Monmouth University in West Long Branch. “And one way to do that is to influence behavior at a much earlier stage. They are targeted to that.”

The Asbury Park Press is searching for innovators in six categories to spotlight entrepreneurs who are reinventing the Shore for the digital age. It is open to businesses based in Monmouth and Ocean counties with fewer than 500 employees. The overall winner will be announced in October.

Real estate/home improvement/energy: April 16 through May 15

Engineering and manufacturing: May 16 through June 15

Leisure and hospitality: June 16 through July 15

To nominate yourself or an entrepreneur, go to app.com/innovators or http://bit.ly/2l2ouec